On March 30th in Auxerre, Burgundy, no wind, no cold, no rain could have prevented the activists from making the voices of animals heard by demanding the abolition of vivisection.

For this unusual happening in France, thirty activists wearing beagle masks named and shamed the nefarious activities of the CEDS (Centre d’Elevage du Domaine des Souches), a company breeding dogs for vivisection which is based in Mézilles, a village located 40 km away from Auxerre city.

A screen broadcast edifying videos of vivisectors in action. Shocking images, tears and cries of tortured animals facing the laughter and chants of vivisectors (obviously amused by what they were doing to the animals) accompanied this macabre but so realistic happening.

Many passersby shocked by what they heard came to chat around the information table held by a representative of the Antidote Europe Scientific Committee , a group committed to the development of non animal testing methods. This is where the petition entitled “STOP vivisection” from the European Citizen Initiative could be signed. 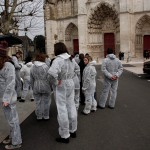 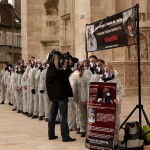 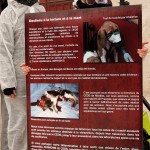 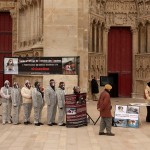 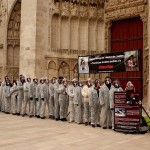 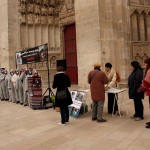 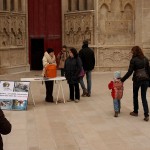 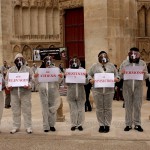 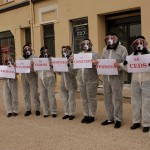 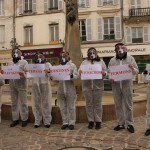 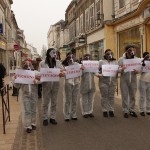 Strolling couples, families, young people and children and uninformed viewers watched solemnly the broadcast images and were taken aback by what they saw.

Also, several activists bravely walked through the streets of Auxerre to leaflet about the CEDS activities and our Collective while inviting passersby to watch the happening.

Seven people holding signs performed a “flash mob” and toured several times in the city center of Auxerre to form the phrase “Close dog farms dedicated to vivisection – Close the CEDS”, a punchline who did not leave passersby indifferent. This was another opportunity to hand out leaflets!

Several media reported this happening which is the first of many to come for closing down the CEDS.

Our group warmly thanks all members and everybody who took part in and supported this action.